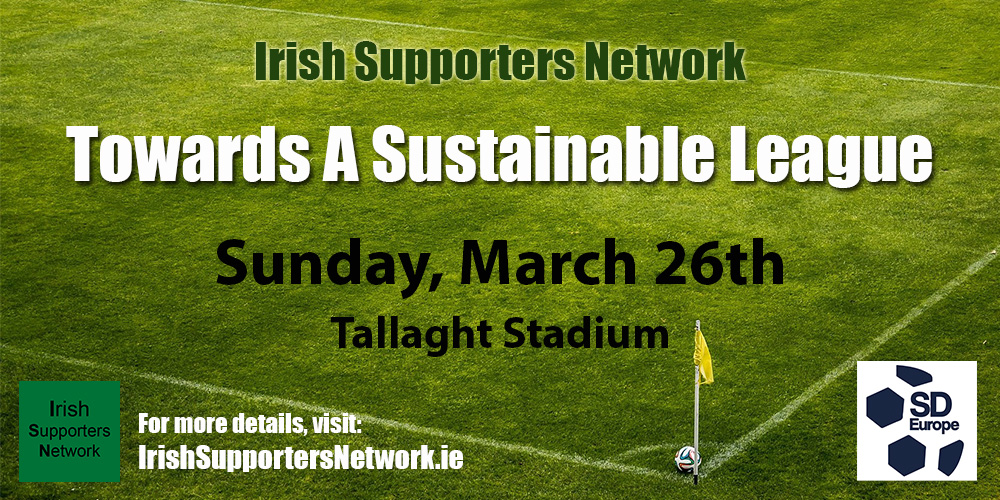 The Irish Supporters Network (ISN) is delighted to announce details of its 2017 League of Ireland workshop, which will take place at Tallaght Stadium on Sunday, March 26th.

Focusing on key areas of interest for League of Ireland football clubs, officials and supporters alike, one of ISN’s key objectives to is promote the benefits and importance of Ireland’s national football league.

The ‘ISN: Towards A Sustainable League’ workshop will kick off with a session on Achieving Sustainable Finance, led by ISN representatives involved in SD Europe’s Clubs and Supporters for Better Governance in Football project. The content will focus on the conflict between short and long-term goals as well as touching on early warning signs of financial concerns among other items.

In the afternoon, SLOs from a number of League of Ireland clubs will lead a discussion on what the role of Supporter Liaison Officer can mean for Irish football clubs. The position is a requirement under UEFA licencing and for all Premier Division clubs. However, having an independent person advocating for supporters and addressing concerns that arise on match night and elsewhere can be of significant benefit to all clubs, at any level of the game.

The final session of the day is entitled: What do Supporters Want? Ask them, which will focus on the importance of bringing fans into the fold, asking for feedback and taking action when and where is possible. A consistent focus on Fan Dialogue is essential for any supporters group, club, league or national association – as is seen across Europe.

As part of this session, LOI supporters are being asked to complete a Match Night Experience survey – the results of which will be unveiled on the day. It is hoped the survey will also highlight examples of good practice and new ideas from around the League that can be shared with all who attend.

Further speakers and presentations will be confirmed closer to the event. Anyone interested in attending should visit events registration page as registration is required. Refreshments will be provided, so there is a suggested donation of €10 per person.

Spokesperson for ISN, Aidan McNelis, said: “At the first ISN event in the Aviva Stadium (2014), participants saw how important it is for League of Ireland clubs and supporters to highlight the positives and the good work being done in our League. This workshop is a follow-on from that.

“In taking a closer look at areas of interest such as Sustainable Finance, the SLO role, and the essential work that can be done around Fan Dialogue and Engagement, participants will go home with a better understanding of what needs to be done in order to make progress within their own football clubs and supporters organisations.”

98.7% of respondents said they would follow public health guidance and stadium protocols in order to return to stadia, when it's safe to do so.

Fans listed financial support of their club, football being their main pastime, and football as a key social outlet as top motivations. ... See MoreSee Less

Fans Back Protocols to Allow for Return to Stadia

Irish football supporters are anxious to return to grounds across the country as soon as possible and the overwhelming majority will adhere to Covid-19 public health guidance in order to do so, a survey has found. Supporters listed financial support of their club, football being their main pastime,....