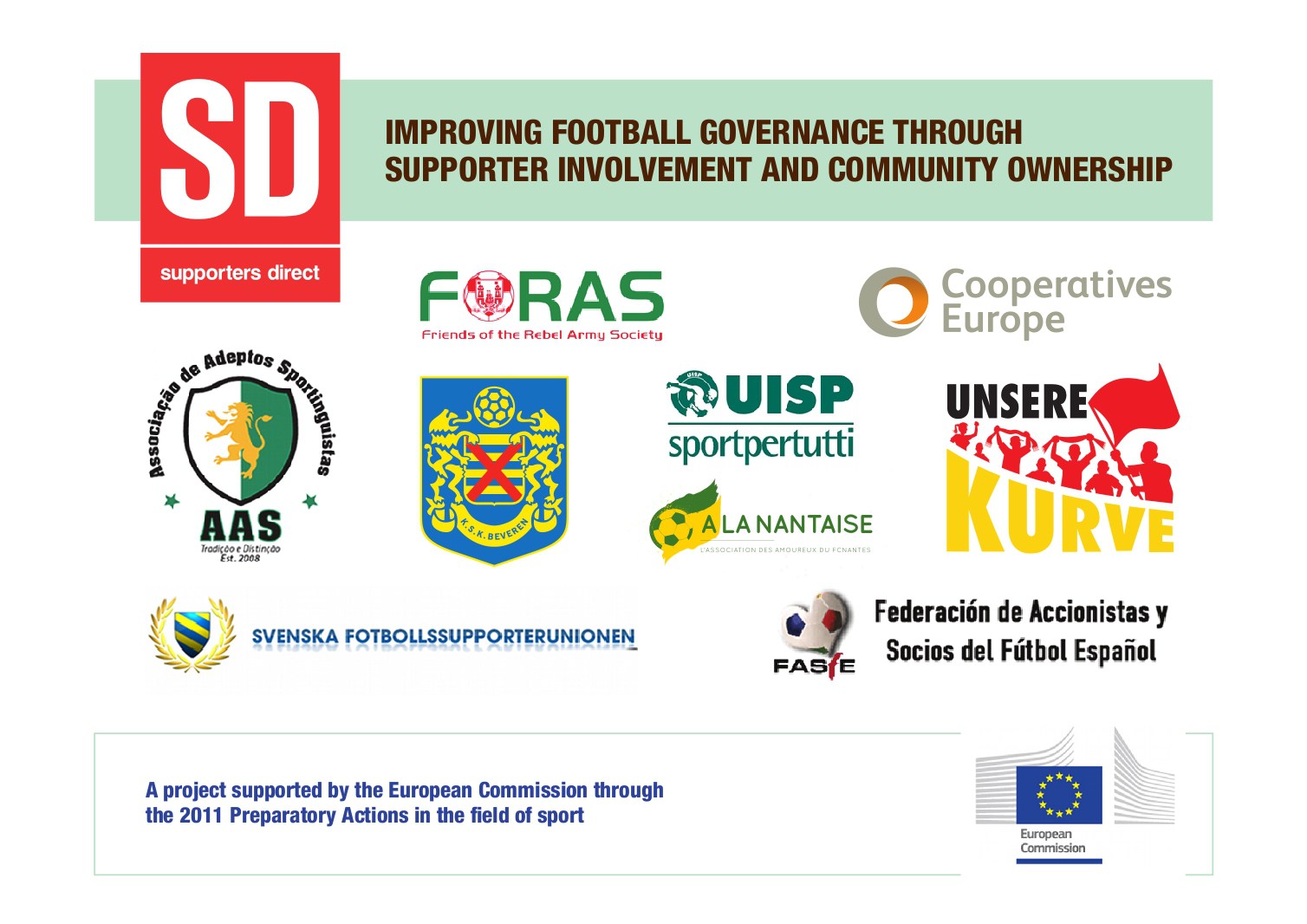 (Led in Ireland by Friends of the Rebel Army Society (FORAS) and Cork City Football Club.)

Between April 2012 and June 2013, FORAS (Friends of the Rebel Army Society) took part in a European Commission-funded project, backed by Supporters Direct Europe.

Hosted in eight countries across Europe including Ireland, the initiative’s main aim was to establish and build capacity for Supporter Involvement and Community Ownership across Europe. There were three specific outcomes: a fans’ survey, a workshop and a handbook – though it quickly became apparent that Irish football would also benefit from the formation of a support network for clubs and groups actively involved in their own football club.

Over 1,500 Irish football fans shared their thoughts in a survey carried out in the Autumn of 2011. The Irish Survey had the highest response rate (compared to population) of all project partners and revealed a great deal of interesting opinions across a range of topics.

– 89% of fans are unsatisfied with how football is run in Ireland.

– 82% of fans feel their views are completely ignored at a national level.

– 64% of fans feel they have little or no involvement in decision making at their club.

– 97% of fans would like to have meaningful input into issues affecting the Airtricity League.

The full press release can be found here, while the full Survey report can be downloaded here: SDE Ireland Survey Report.

Heart of the Game conference

A two-day conference and workshop was held in Cork in November of 2011 – with representatives of a series of clubs (including FC United of Manchester and AFC Wimbledon), trusts, fan organisations and UCC involved. The primary objective was to motivate and encourage attendees to take further action on a range of topics including governance and community.

Download a full summary of the event here: Heart of the Game conference summary.

Heart of the Game handbook

The survey and conference fed nicely into preparations for the research and publication of a handbook dedicated entirely to supporters and the League of Ireland. The document brings together practice advice and case studies – and argues that fans have a very meaningful and central role to play in the future of their football clubs. The handbook is FREE and available to download: Heart of the Game handbook.

98.7% of respondents said they would follow public health guidance and stadium protocols in order to return to stadia, when it's safe to do so.

Fans listed financial support of their club, football being their main pastime, and football as a key social outlet as top motivations. ... See MoreSee Less

Fans Back Protocols to Allow for Return to Stadia

Irish football supporters are anxious to return to grounds across the country as soon as possible and the overwhelming majority will adhere to Covid-19 public health guidance in order to do so, a survey has found. Supporters listed financial support of their club, football being their main pastime,....