Irish football supporters are anxious to return to grounds across the country as soon as possible and the overwhelming majority will adhere to Covid-19 public health guidance in order to do so, a survey has found. Supporters listed financial support of their club, football being their main pastime, and football as a key social outlet as the top motivations behind their desire to return.

On the eve of the new League of Ireland season, a total of 1,826 football supporters responded to a survey led by the Irish Supporters Network (ISN), and supported by their colleagues in the Irish Football Supporters Partnership (IFSP), the Confederation of Republic of Ireland Supporters Clubs (CRISC) and YBIG Independent Supporters Mandate. The IFSP has had two representatives on FAI Council since July 2019 and works to ensure that all fans have a voice within the association’s structures.

Of the supporters that managed to attend a League of Ireland fixture in the second half of 2020, there was strong praise for the efforts of clubs as well as their staff and volunteers in making fixtures safe, well organised and also welcoming those that could attend. 95% of respondents identified with a League of Ireland club from across the Premier and First Divisions.

Asked when they would like to return to watching live football, 71.5% said they would seek to return “as soon as possible”, ahead of “when there are no restrictions on gate numbers” (9.8%) and “when Covid is no longer an issue at all” (9.7%).

Asked if they were willing to adhere to public health guidance and stadium protocols in order to facilitate a limited return when it is safe to do so, a huge majority (98.7%) of respondents answered ‘Yes’. In addition, 89.3% of respondents pledged to publicly support an awareness campaign aimed at promoting public health guidance amongst the wider football community if it helped to re-open/keep football open to supporters in the coming months.

Irish football’s financial dependency on supporters was highlighted once again when respondents were asked why they wanted to return to stadia as soon as possible. The most popular ‘Priority 1’ was financial support for clubs and teams. The social and community element of football also shone through too, with the second and third most popular choices being: Football is my main pastime and It’s a social outlet for me.

On measures that would encourage supporters to return to grounds once it’s safe to do so, masks were seen as an important consideration:

Just over a quarter of respondents had the opportunity to attend a League of Ireland fixture after grounds opened up again with limited capacity last summer. The vast majority that had this opportunity felt the guidance and instructions provided were ‘Very clear’ and, when asked to share additional feedback, comments strongly commended clubs for their work in ensuring games were safe and followed protocols. 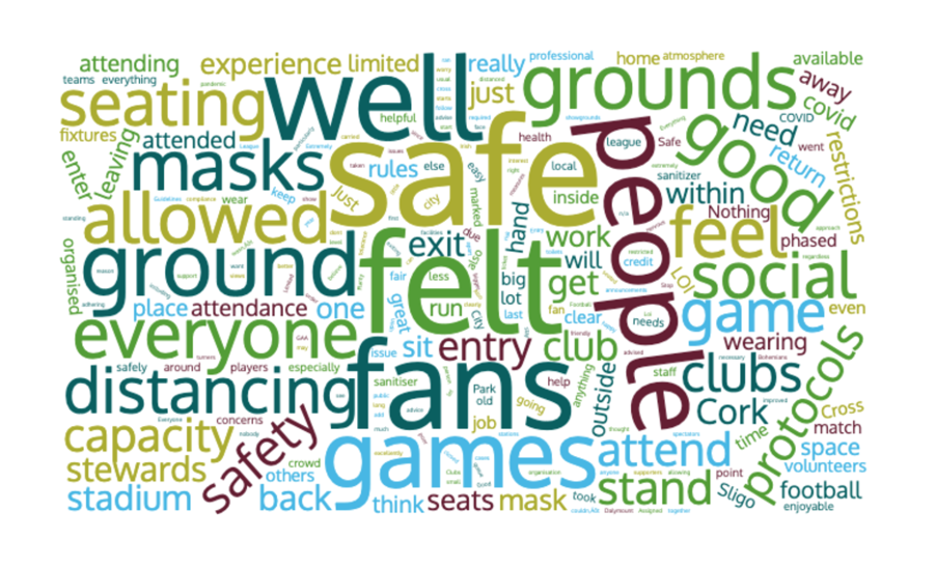 In a further demonstration of supporters’ loyalty, 36.3% of respondents are still willing to purchase season tickets despite the uncertainty around timelines for supporters returning. Slightly less (35%) said they would prefer individual tickets for specific matches, with entry included in club membership (11.5%) third.

“Everyone involved in League of Ireland football is anxious to have supporters back in grounds once it’s safe for them to return, and the survey findings include lots of useful information that can help inform preparations in the coming months. The vast majority of supporters want to return as soon as they possibly can and are hugely supportive of any public health guidance and the stadia protocols that will allow that to happen,” Niamh O’Mahony, Secretary of the Irish Supporters Network (ISN), said.

“The reasons why are also important to highlight – fans think about their clubs’ finances, football being their main pastime and football being a social outlet. That sense of community and belonging is key. The League of Ireland is underpinned by the dedication of supporters and volunteers and, as one respondent said, fans and passion drive this league more than anything else. That same passion has been largely missing from grounds for the last 12 months.

“Feedback from the games in the second half of 2020 was really positive in terms of the clubs implementing public health measures and ensuring fixtures were run in a safe and organised manner. ISN, CRISC and YBIG Mandate have been meeting with the FAI regularly on this issue to ensure the voice of supporters is heard and taken into account in the ongoing Return to Stadia work. The data also speaks for itself – not a single Covid-19 outbreak was linked to League of Ireland games or training in 2020, and clubs, volunteers and supporters can all take credit for that.”

For further detail on the survey findings or further information, email: