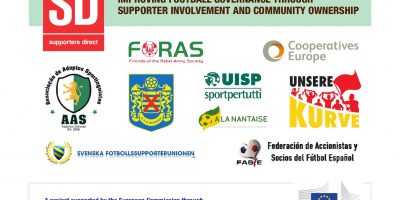 One key output of the Improving Football Governance through Supporter Involvement and Community Ownership project was the Heart of the Game handbook. . Please follow and like us: 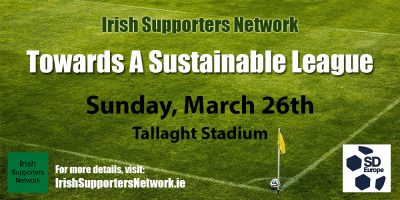 The Irish Supporters Network (ISN) is delighted to announce details of its 2017 League of Ireland workshop, which will take place at Tallaght Stadium on Sunday, March 26th. Focusing on key areas of interest for League of Ireland football clubs, officials and supporters alike, one of ISN’s key objectives to is promote the benefits and importance of Ireland’s national football league. The ‘ISN: Towards A Sustainable League’ workshop will kick… 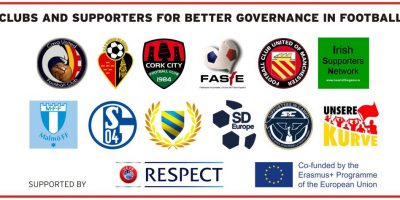 The Irish Supporters Network were a contributing organisation of the Clubs and Supporters for Better Governance in Football project. It was a two-year collaborative partnership, coordinated by SD Europe, and co-financed by the Erasmus+ programme of the European Union and UEFA. The project sought to help promote EU principles on good governance in sport through a training, education and exchange programme involving member-run football clubs and national supporters organisations, from…

Improving Football Governance through Supporter Involvement and Community Ownership (Led in Ireland by Friends of the Rebel Army Society (FORAS) and Cork City Football Club.) Between April 2012 and June 2013, FORAS (Friends of the Rebel Army Society) took part in a European Commission-funded project, backed by Supporters Direct Europe. Hosted in eight countries across Europe including Ireland, the initiative’s main aim was to establish and build capacity for Supporter…

Have you tickets for the games in Dublin? You can ask for a refund until tomorrow but there are further options after that deadline too

📣 Another reminder that #EURO2020 ticket buyers have until 14:00 CET on 26th January to request a refund.

🔗 If you’re unsure how to request a refund, refer to this handy guide produced by @cafefootball: https://t.co/qoNAKq2H1W

There's nothing quite like a snow covered Finn Park 😍

Reply on TwitterRetweet on TwitterLike on TwitterTwitter
Load More...

Have you been to a League of Ireland game since the season resumed?

We're looking to hear feedback from supporters. Either send us a message, reply below or drop an email to: info@irishsupportersnetwork.ie

Everyone at the Irish Supporters Network was shocked and saddened to hear the news of the untimely death of John F Kennedy yesterday.
John was involved with, and was honoured by, Cork City for over 30 years, in numerous roles. He was heavily involved with the Co-op, and represented them here at ISN. He was instrumental in integrating CCFC into the community, and was a role model for anyone interested in club or community volunteering.
He was a gentleman to his core, and we are all poorer for his passing. RIP John.

Macclesfield Town fans say they are “devastated” after the club was wound up in the High Court over debts totalling more than £500,000.

Fundraising initiative from GUFC Co-op👏🏻 Many thanks to all the supporters who have signed up to our Fantasy Football competition.